Under the leadership of Melvil Dewey, the State of New York initiated a state funded traveling library system in 1892.  Traveling libraries were small rotating collections that provided a method for extending library service to rural areas.  These small libraries usually from 30 to a hundred books were located in a post office or store with a volunteer acting as the caretaker of the collection.  In New York the collections stayed in one location for six months before they were rotated.  Michigan initiated a similar system in 1895 and Iowa in 1896.

Traveling libraries began in Wisconsin in 1896, when Senator J. H. Stout of Menomonie, Wisconsin privately funded a system of these libraries for Dunn County.  He provided 500 books divided into collections of 30 volumes each.  He was assisted in the selection of titles to be included by the Wisconsin Free Library Commission which began in 1895.  Senator Stout along with Lutie Stearns and Frank Hutchins had been instrumental in starting the Commission. 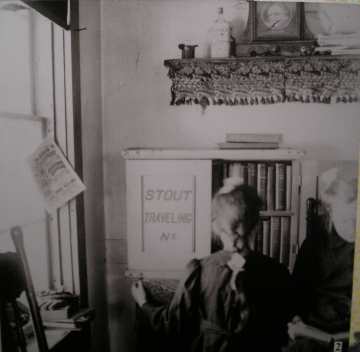 The images to the left and below were provided by the Dunn County Historical Society. The bookcase pictured below is currently on display at the Society's Russell J. Rassbach Heritage Museum in Menomonie. 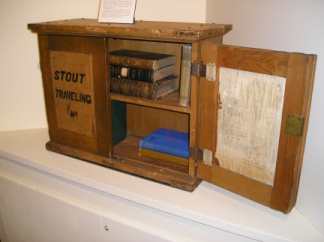 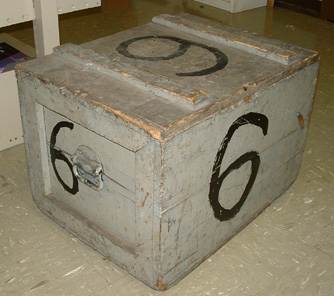 More images of the library case.

More about the history of the McMillan Memorial Library and the J.D. Witter Traveling Library. 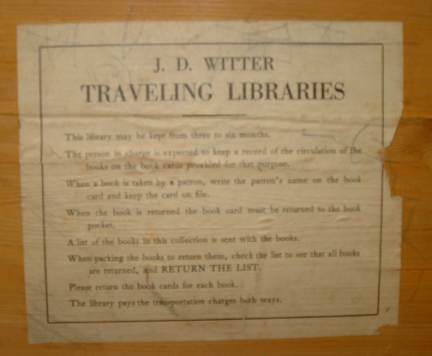 This library may be kept from three to six months.
The person in charge is expected to keep a record of the circulation of the books on the book cards provided for that purpose.
When a book is taken by a patron, write the patron's name on the book card and keep the card on file.
When the book is returned the book card must be returned to the book pocket. A list of the books in this collection is sent with the books.
When packing the books to return them, check the list to see that all books
are returned, and RETURN THE LIST.
Please return the book cards for each book.
The library pays the transportation charges both ways. 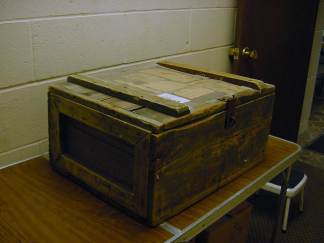 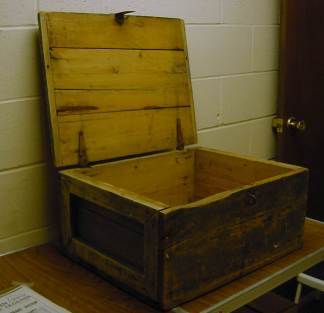 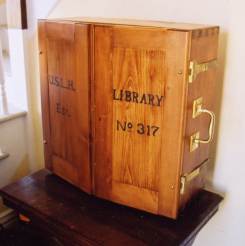 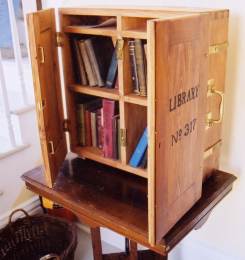 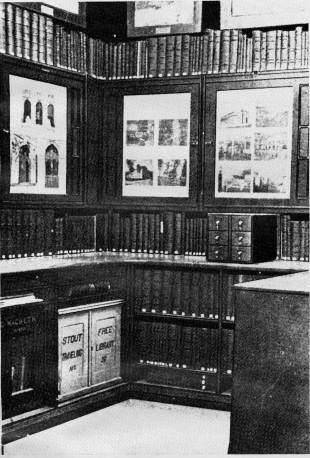 One of the traveling library units from the Stout Free Traveling Library was included in the exhibit of the American Library Association at the Paris Exposition of 1900 (lower left of photograph).  Image from Library Journal, Vol. 25 (1900), facing p. 282.

Digital copy of "Traveling Libraries in Wisconsin" by Lutie Stearns, 1910,in the State of Wisconsin Collection:
http://digicoll.library.wisc.edu/cgi-bin/WI/WI-idx?id=WI.TravelLibs

Digital copy of "Free traveling libraries in Wisconsin : the story of their growth, purposes, and development, with accounts of a few kindred movements", Wisconsin Free Library Commission, 1897, in the State of Wisconsin Collection:
http://digital.library.wisc.edu/1711.dl/WI.FreeTravel