Under the leadership of Melvil Dewey, the State of New York initiated a state funded traveling library system in 1892.  Traveling libraries were small rotating collections that provided a method for extending library service to rural areas.  These small libraries usually from 30 to a hundred books were located in a post office, a store, or someone's home with a volunteer acting as the caretaker of the collection.  In New York the collections stayed in one location for six months before they were rotated.  Michigan initiated a similar system in 1895. Iowa and Wisconsin followed in 1896. Many other states also adopted this model of public library extension including among others California, Idaho, Illinois, Nebraska, Ohio, Oregon, Pennsylvania, and Virginia.  Other interesting traveling library efforts were the Seaboard Airline Railway Free Traveling Library System and the United States Lighthouse Service Traveling Library.  There were also some commercial traveling libraries such as those provided by the H. Parmelee Library Company (See below). 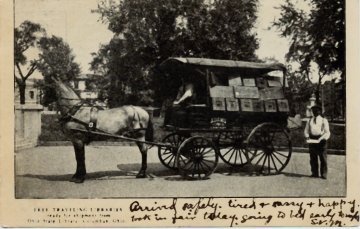 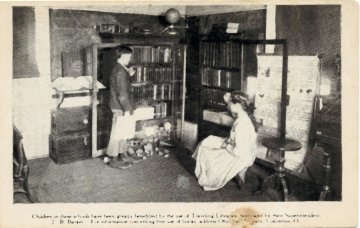 The postal card below is an acknowledgement to the PA Free Library Commission by a traveling library station that the traveling library unit has arrived "exactly as listed".  The message on the front of the card, however, says, "But we received no book case to keep the books in, only the ruff box they were shipped in." 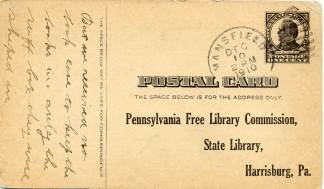 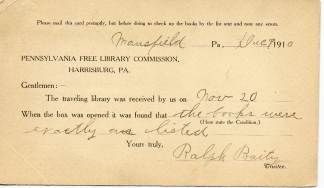 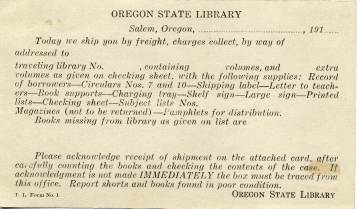 An unused postal card used by the Oregon State Library to notify a traveling library station that a shipment of books had been made. 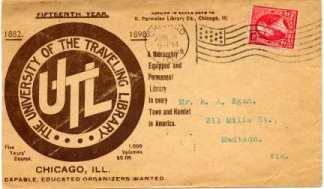 The H. Parmelee Library Company was founded in Iowa in 1882. It developed a rotating "package" collection which it called the University of the Traveling Library.  The company relocated to Chicago in 1898 where it continued to market its rotating package library as a way of providing "A Thoroughly Equipped and Permanent Library In every Town and Hamlet in America." For an interesting take on the H. Parmelee Library Company check out the entry related to it at the Lucile Project website.

Like many historical library artifacts, the book cases and boxes that transported and housed traveling libraries have largely disappeared.

Some of those that remain are located at the following locations.

If you know others, please contact me at nix@libraryhistorybuff.org .