The  Mercantile Library Association of New York City (now The Center for Fiction - Founded in 1820 as the Mercantile Library) and hereafter referred to as MLNY) was established in 1820.  It was the largest and most successful of the mercantile libraries, and for that matter of all membership libraries.  By 1871, it was the fourth largest library in the United States, exceeded in size only by the Library of Congress, the Boston Public Library, and the Astor Library in New York City (a predecessor of the New York Public Library). 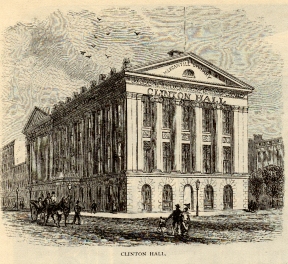 This llustration is from the February 1871 issue of Scribner's Monthly. It depicts Clinton Hall located at Astor Place in NYC and the library's reading room.  Clinton Hall which housed the MLNY from 1854 to 1890 was operated by a separate organization established to serve as the landlord for the MLNY. 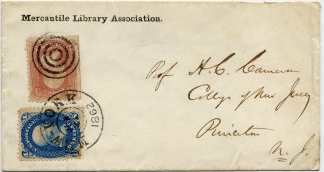 In 1862 when this cover was mailed, many of the young men who were the members of the MLNY were away serving in the Union Army.

In 1866 the MLNY initiated a home delivery service for its members. This may have been the first such service of any non-profit library in America. 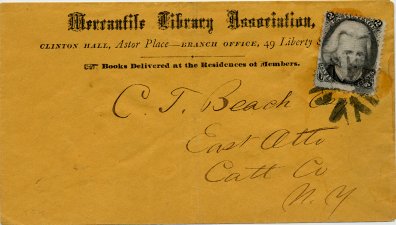 Cover circa 1868 with message: "Books Delivered at the Residences of Members".

Members of the MLNY pre-paid for home delivery service by purchasing adhesive delivery stamps which were then affixed to a book request form.  Initially, the request forms were placed in collection boxes that the MLNY provided in various locations in the City of New York.  Messengers from the library then retrieved the forms. Books were delivered by horse and wagon.

The MLNY delivery stamps are listed as local stamps by the Scott Specialized Catalogue of United States Stamps and Covers with the numbers 105L1, 105L2, 105L3, 105L5, and 105L6. There is also a postal card with an image of the 105L6 delivery stamp on the back listed as 105LUX1. 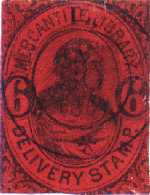 There is a strong argument that the MLNY initially charged 6 cents for each book delivered through this service. There is a 6 cent delivery stamp that is listed by Scott as 105L5. The image of the used 6 cent stamp to the left which is enlarged was provided by Gordon Stimmell. 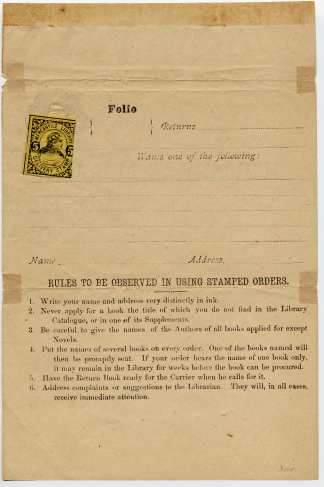 In April 1870, the MLNY began using the collection boxes of the U.S. Post Office Department to collect delivery request forms.  For seven cents or 20 for a dollar, members could purchase a 2 cent Post Office wrapper with a 5 cent delivery stamp (Scott 105L2) affixed to the form printed on the inside of the wrapper. 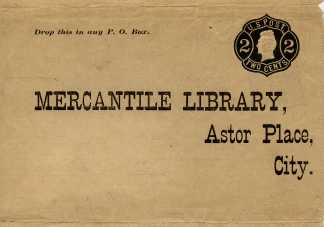 This delivery check with a 5 cent yellow on black delivery stamp (Scott 105L2) is one format in which the stamp was sold. The image is courtesy of Siegel Auction Galleries Inc.

This copy of the 5 cent yellow on black delivery stamp is owned by the MLNY and was discovered by staff in 2005. It was obviously part of a Delivery Check similar to the one above. 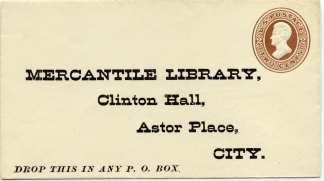 Two cent stamped envelopes may have also been used to transmit request forms printed on cards.

On October 1, 1874, after a one year suspension of the home delivery service, it was reinstated and the delivery rate was increased to 10 cents.  A new stamp (Scott 105L6) was issued to indicate payment for the service. 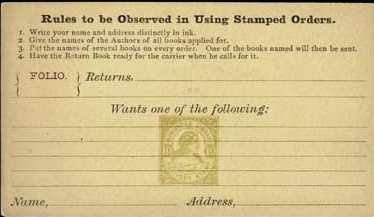 A postal card with the 105L6 stamp imprinted on the back (Scott 105LUX1) was also issued. The image is courtesy of Siegel Auction Galleries Inc.

This irregular and damaged block of nine copies of the yellow on black 10 cent delivery stamp is owned by the MLNY and was discovered by the staff in 2005. 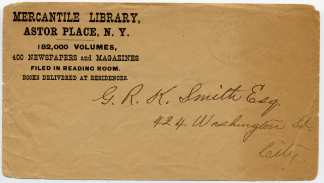 This cover circa 1880-83 was delivered by Hussey's Post of New York City (the Hussey's Post handstamp is not visible on this scan, but can be seen on close examination).  The cover boasts a collection for the MLNY of 182,000 volumes and 400 newspapers and magazines. It also indicates that "Books Delivered at Residences".

The home delivery service of the MLNY continued into the 1930s. In the later years of the service books were delivered to the homes of members through the regular mail.

For more information on the delivery stamps of the Mercantile Library of New York see the August 2005 issue of the Chronicle of the U.S. Classic Postal Issues (Bowman, Nix, & Stimmel), the March 20, 2006 issue of Linn's Stamp News (Nix), and the December 2007 issue of the American Philatelist (Nix, Bowman, & Stimmel).

If you have additional information about the delivery stamps of the MLNY, please contact me at nix@libraryhistorybuff.org . I would like to hear from you.