The great majority of envelopes sent from and to libraries in the 20th and 21st centuries has postage which is affixed by meter postage machines.  The United States Post Office Department authorized the use of meter stamp machines in 1920.  The Pitney Bowes Postage Meter Company was the first company to market postage meter stamp machines in the United States and its machines are the most widely used.  Pitney Bowes had a virtual monopoly on meter postage machines for the first fifty years of their use. Slogans which appear to the left of the postage component of the meter stamp carry additional information not related to the postage function.  Slogans were first used in 1929. 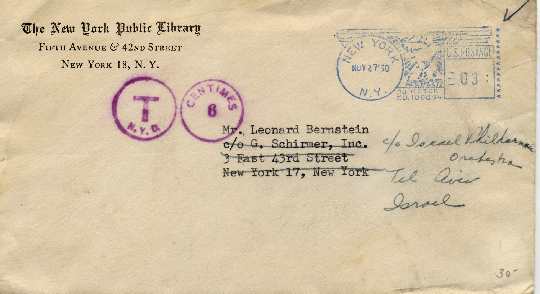 This cover would be a typical use of meter postage by a library in 1950 except that it is being sent to a famous patron -  Leonard Bernstein.  Hopefully it was not an overdue notice since it has been forwarded to the Israel Philharmonic Orchestra in Tel Aviv.

This meter postage and slogan is a specimen which appeared on an envelope prepared by the Pitney Bowes Postage Meter Company for Gaylords, a library supply company, in 1938.

The meter slogan used in combination with the meter postage reads "Books Fit For a King".  It was used in this instance to promote the Hutchinson (Kansas) Public Library in 1969.  It appears in conjunction with the mail of other libraries, however, and probably was a stock "slug" available from Pitney Bowes.