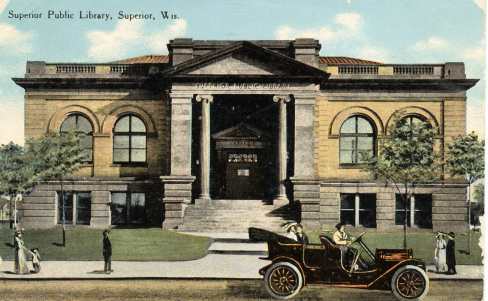 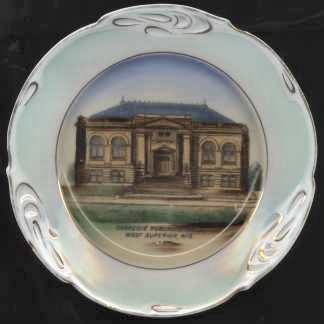 The building  located at 1204 Hammond Avenue.  served as the Superior Public Library until December 31, 1991, when the collection was moved into new quarters. The building which is privately owned has been vacant since 1991. The Superior City Council voted to demolish the building, but is currently under a restraining order not to do so.  A group called the Friends of the Carnegie has purchased the building with the hope of preserving the building.

Exert from a report prepared by Mead & Hunt, Inc. in 1999 for the Wisconsin Historical Society:

The building was designed by Superior architect Carl Wirth and erected in 1901. Neoclassical Revival in style, this one-story brick building rests on a raised, rusticated, red stone basement. The plan is composed of a rectangular front section and a polygonal rear section. The front section of the building features brick quoining, a prominent stone water table, a stone frieze and a dentilled cornice, and a stone balustraded parapet. The hip-with-deck roof is clad with asphalt shingles. The building faces west and exhibits a symmetrical front facade with a slightly-projecting, central, entrance pavilion. The entrance pavilion is finished with stone. Tall, fluted Ionic columns support an entablature and pediment and form the portal. Both the cornice and raking cornice are ornamented with dentils. The entrance is recessed within the portal and consists of a wide doorway framed with engaged Doric columns, an entablature carved: "CARNEGIE," and a pediment. The regular fenestration pattern displays two broad, round-arched openings on either side of the entrance pavilion at the first story, and three more round-arched openings on the side facades. Wide, flat-arched openings appear at basement level. Some openings exhibit replacement windows, while others are boarded. The polygonal rear section features regularly-spaced, flat-arched openings, most of which are boarded.

The first floor plan of the Superior Public Library is intact. The rectangular section features reading room and reference areas. The opening into the polygonal section, where the stacks were housed, is cased and displays Ionic columns, a simple frieze, and a cornice enriched with dentils and an egg-and-dart molding. The original classical woodwork has been retained. The walls and ceilings are plastered. Flooring treatments include narrow boards and mosaic tile. The building retains good integrity and is potentially eligible [for the National Register of Historical Places] under Criterion C: Architecture, as a fine and intact example of an early twentieth century library building and as a good example of Neoclassical Revival style. It is also eligible under Criterion A for its role as an educational and cultural center in the community.

Exert from a report prepared by Mead & Hunt, Inc. in 1999 for the Wisconsin Historical Society:

The East End Branch, Superior Public Library is a one-story brick building accented with stone. Built in 1917 to the design of Kenneth Crumpton, the library is Georgian Revival in style. The building's low-pitched, hip roof is clad with asphalt shingles. The library sits on a raised basement and is T-shaped in plan, with the top of the T measuring 60 feet by 40 feet. The East End Branch Library faces north and displays brick quoining, round-arched  multi-paned windows with brick-and-stone surrounds, a stone water table, and a simple, wood entablature. All the facades are symmetrical. On the front facade, a flight of concrete stairs rises to the central, slightly-projecting entrance pavilion. The entrance is composed of a pair of paneled doors surmounted by a segmental-arched transom. Paired, wood pilasters frame the entrance. Above, the entablature is enriched with modillion blocks and surmounted by a brick parapet with a stone panel, carved: "SUPERIOR PUBLIC LIBRARY 1917 EAST END BRANCH." Multi-paned awning windows appear at basement level.

The first floor plan is intact and consists of an open room with a reading area on one end and the children's department on the other end. The checkout desk was in the middle, and the book stacks were placed in the projecting section behind the checkout desk. A lecture room, restrooms, and a librarian's office were located in the basement. The interior features plaster walls and ceilings enriched with classical moldings, narrow board floors, and a simple, brick fireplace. The building has been a single-family residence since 1992. Despite the change in use, the East End Branch, Superior Public Library retains excellent integrity and is potentially eligible [for the National Register of Historical Places] under Criterion C: Architecture, as a fine and intact example of an early twentieth century library building and as a good example of Georgian Revival style. It is also eligible under Criterion A for its role as an educational and cultural center in the community.