I appreciate the support of the 1,719 people who voted for me for APRL Trustee. Unfortunately, this fell short of the number needed for election. Best wishes to the APRL Board as it faces some very challenging problems in the next few years. Larry 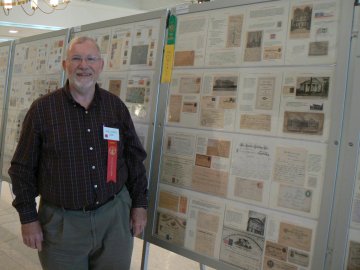 I'm running for the position of Trustee of the American Philatelic Research Library for the 2009-2015 term in the Spring APS election. This webpage provides information in support of my candidacy for that office. Contact me at nix@libraryhistorybuff.org .

Philately and libraries are a wonderful combination. As a retired librarian who is a serious philatelist I appreciate that combination more than most. I am seeking your vote for Trustee of the American Philatelic Research Library because I think my knowledge of libraries, library technology, and library networking will be an asset to the APRL in making philatelic knowledge more accessible to the philatelic community.

Before I retired I was Director of Public Library Development for the State of Wisconsin for twenty years. In that capacity I actively participated in the technology revolution which libraries have undergone in Wisconsin and the nation. I was responsible for administering state and federal programs for public libraries in Wisconsin which resulted in universal public library access to the Internet and over ninety percent participation by public libraries in shared automated library systems. Since my retirement I continue to be active in library activities including a variety of library consulting projects. For three years I served on the Board of the Wisconsin Library Association Foundation during which time it successfully implemented the most aggressive fundraising and publicity program in its history. I am currently Chair of the Steering Committee of the Wisconsin Library Heritage Center, the first endeavor of its kind in the nation.

Even my philatelic interests relate to libraries. I am a collector and exhibitor of postal artifacts related to libraries. Philatelic exhibiting has resulted in multiple gold awards and has been the impetus for my doing serious research related to library history and philately. This has provided me with a good understanding of the needs and challenges of philatelists who do not have convenient physical access to philatelic research collections.

I am particularly interested in the leadership role that the APRL can play in supporting and cooperating with other philatelic libraries in the nation. I recently began writing the “Library News” column for Philatelic Literature Review. This has provided me with insight into the needs and contributions of these important libraries.

Since retirement in 2003 I have pursued my interests in library history and the hobby of stamp and cover collecting. This includes maintaining the Library History Buff Web site; the Library History Buff Blog; serving as Chair of the Wisconsin Library Heritage Center Steering Committee; and serving as webmaster for the Wisconsin Library Heritage Center website. I have also developed several philatelic exhibits featuring postal librariana. I have written articles which have appeared in both library and philatelic periodicals.  I continue to be active in the  Wisconsin Library Association, and I have also undertaken several projects as a library consultant.  To read about how I became a collector of postal librariana and a library history buff click here.

Information about my exhibiting activities can be found on these two web pages: